Startups in Greece are becoming increasingly popular. Investments have skyrocketed over the past few years, the government is actively supporting the emerging industry, job opportunities have grown fast and people are increasingly founding or joining startups every day. Moreover, we are witnessing an ongoing trend where a growing number of people from the Greek diaspora are returning to Greece to join a startup, further contributing to the flywheel.

In our mission to move the startup industry forward, we believe transparency and collaboration are key. As part of our ongoing efforts to attract, develop and retain talent across our ecosystem at large, today we are releasing for the first time in our market what we consider to be a significant resource for founders, operators, and every professional with an interest in Greek startups alike.

We surveyed 27 companies employing a total of 1915 employees in Greece and collected full compensation data for their technology workforce. We would like to thank every participating company and their unsung heroes of HR for putting in the work and contributing a wealth of data that enabled this report.

We are happy to be able to make such data publicly available, and report the following:

Here's an overview of compensation data per function: 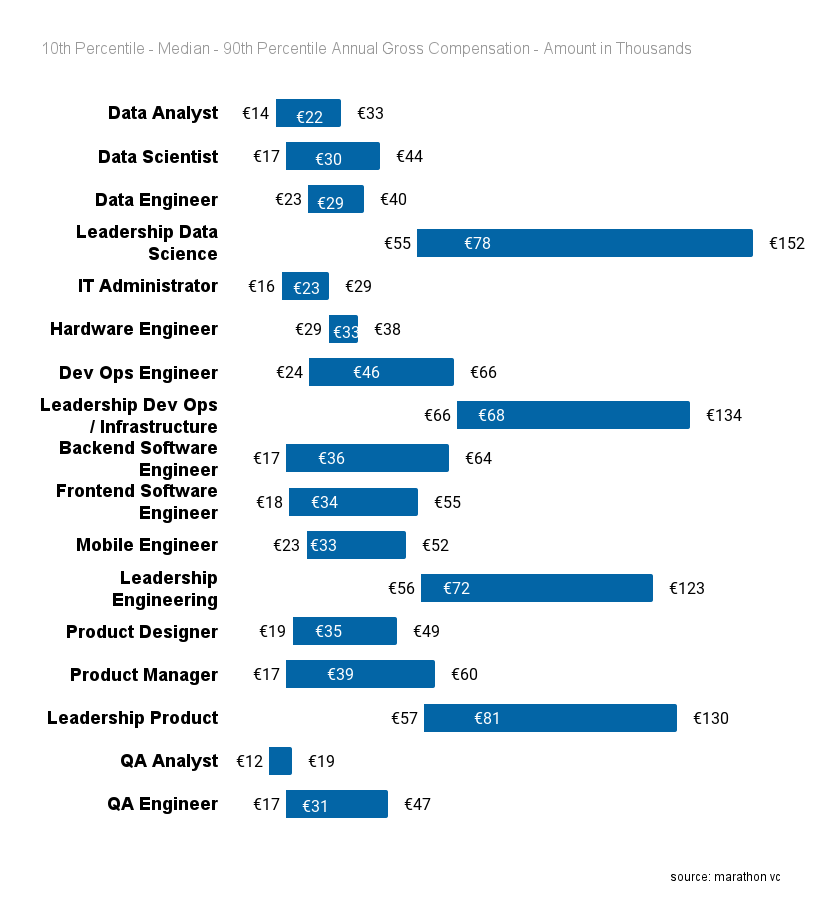 Please continue reading for more context and further details below.

27 Greek startups of various stages participated in this research. The participating companies were asked to provide detailed compensation data on each technology role based in Greece and align the role with a job family, track, and levels (as indicated below), to ensure consistency across seniority levels.

Compensation Averages per Job and Level

The above graph (2021 Greek Startups Tech Compensation) is a result of the analysis of the compensation data. It shows the 10% lowest and 90% highest annual gross compensation per job. We decided to report on the 10th and 90th percentiles to exempt any outliers from the data, ensuring a realistic and true picture of the results. In addition, we indicate the median for each role to provide a clear understanding of the value at which 50% of the employers pay at and below, or at and above.

In the table below you will find the median and average gross annual salary per job and seniority level. If you would like to get a better understanding of the net amount, please use a tool such as Aftertax.

While analyzing the data we found that, for many roles, the compensation range for managers was not significantly higher than for individual contributors (ICs) at the same seniority level. This is a very positive trend that coincides with what we see happening globally. Companies are increasingly ensuring there are growth opportunities for both managers and individual contributors alike and compensating them equally.

Among the leadership roles, we can see that the average of the engineering leadership role is significantly lower than that of the Data Science and DevOps/ Infrastructure role. This is likely due to this role often being filled by one of the (co-) founders. In particular, in early-stage companies, we often see that founders will give themselves a rather low salary to ensure all of the money goes back into the company. This explains why the average is significantly lower than the rest of the executive roles.

In general, the reported tech salaries are quite competitive in Greece and we believe that they are attractive to a greater part of the local workforce, fueling fast-growing interest in startups. At the same time, we also recognize that the ranges are significantly lower compared to similar roles in more mature markets (such as Germany, the UK, or the US). This provides opportunities for big tech and well-funded startups from around the world to set up shop in Greece; such opportunities are increasingly put to good use by various players as we speak (Acquisitions of Softomotive by Microsoft and Lenses by Celonis).

In the above context and also taking into account the rapid proliferation of remote work, we expect such compensation gaps to decrease, with local salaries and benefits packages to continue improving, providing increasingly appealing employment opportunities to a blooming startup workforce.

In addition to compensation, companies were asked if each role was given equity or not. Almost 40% of the roles receive equity.

Percentage of Jobs given Equity 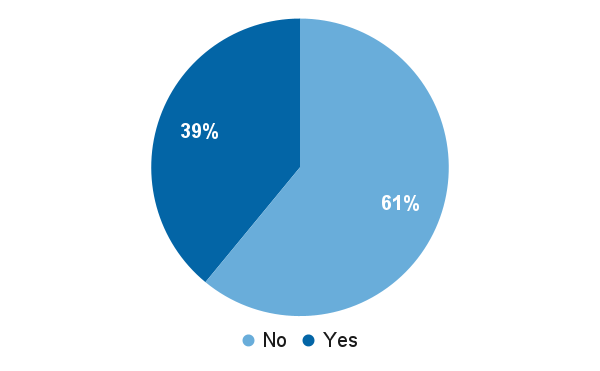 Even though in EU countries equity is less often part of the compensation package (as opposed to US companies), the data shows that the majority of leadership positions receive equity. In addition, we also see approximately 33% of non-leadership roles receive equity.

In Greece, due to the low capital gains tax (15%), providing equity as part of the compensation package is a huge opportunity. Therefore we expect this figure to increase over the coming years as startups become more popular employers and employees gain a better understanding of the potential value of equity.

Percentage of Jobs given Equity per Job Family 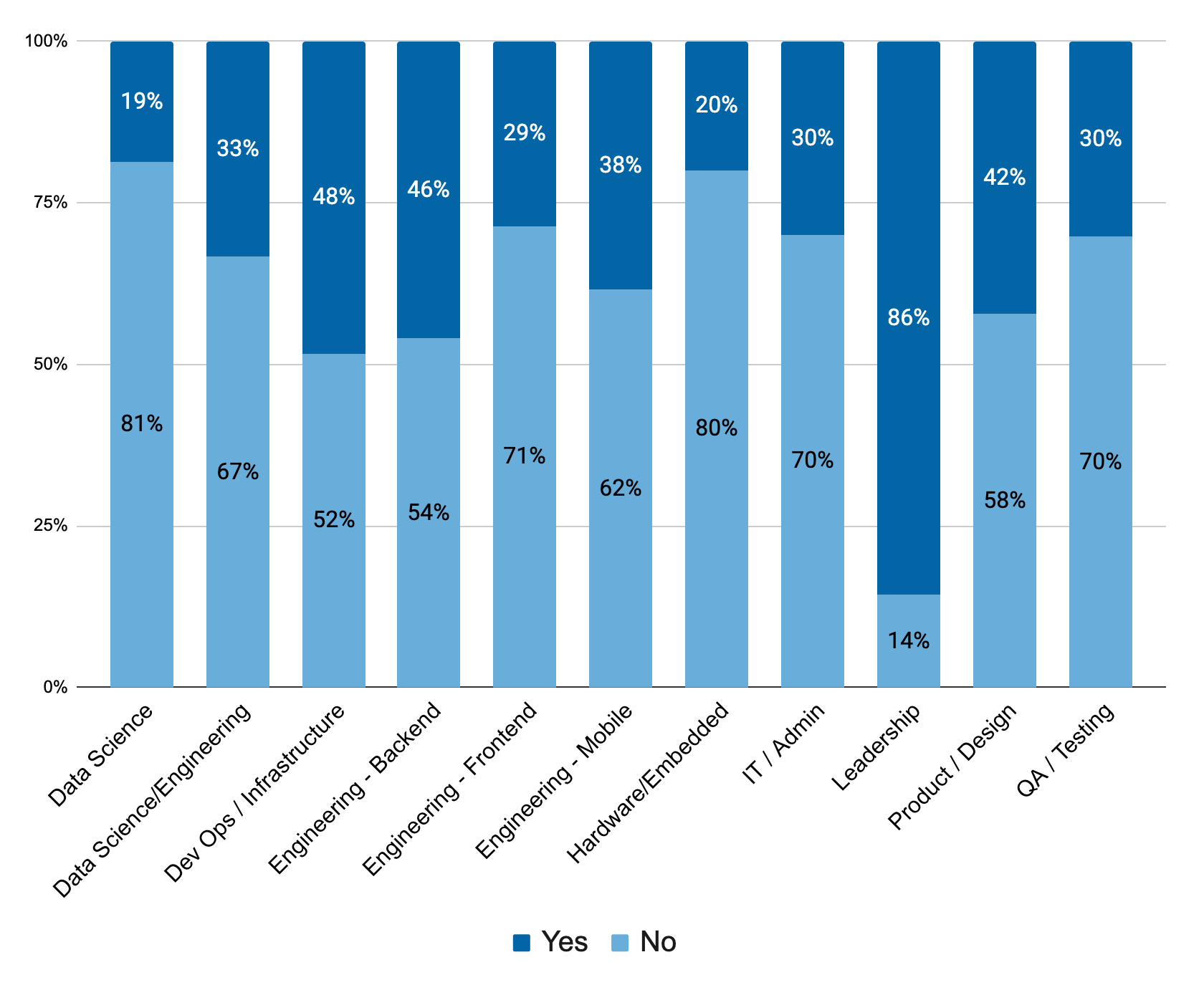 The most popular benefit offered by the participating companies is private health insurance. Other broadly adopted benefits include a learning and development budget, home office budget, supplementary paid time off, supplementary paid sick leave as well as a conferences budget. In addition, an increasing number of startups are also adopting a broader set of benefits, such as mental health support, supplementary maternity, and paternity leave.

Low-cost, high-impact benefits present an opportunity for companies to become even more attractive, without considerably impacting their budget.

Location of Jobs Reported on 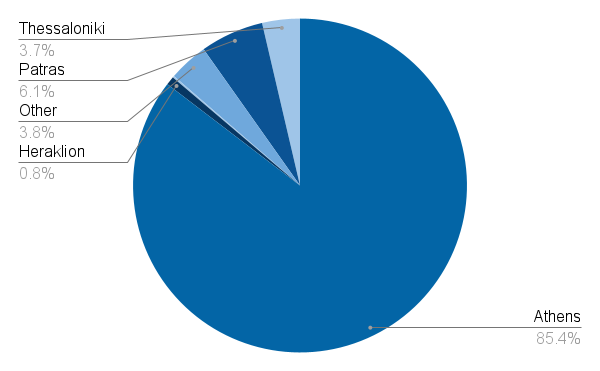 Similar to other countries, there is a gender gap in tech roles. Less than 20% of the employees in our study are female, and only 3% of the leadership roles are occupied by women. Research has shown that hiring women into tech leadership roles not only can bring about higher revenues and drive innovation, it also brings role models to attract and retain more women into tech roles. 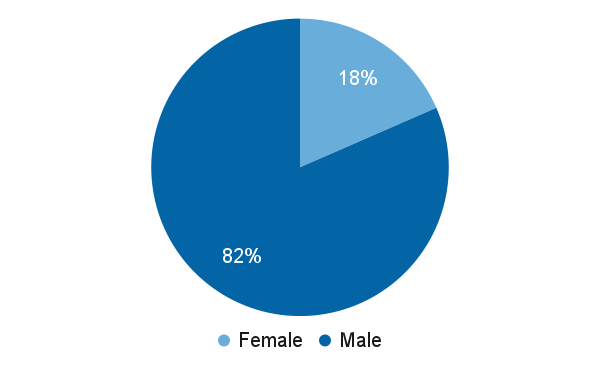 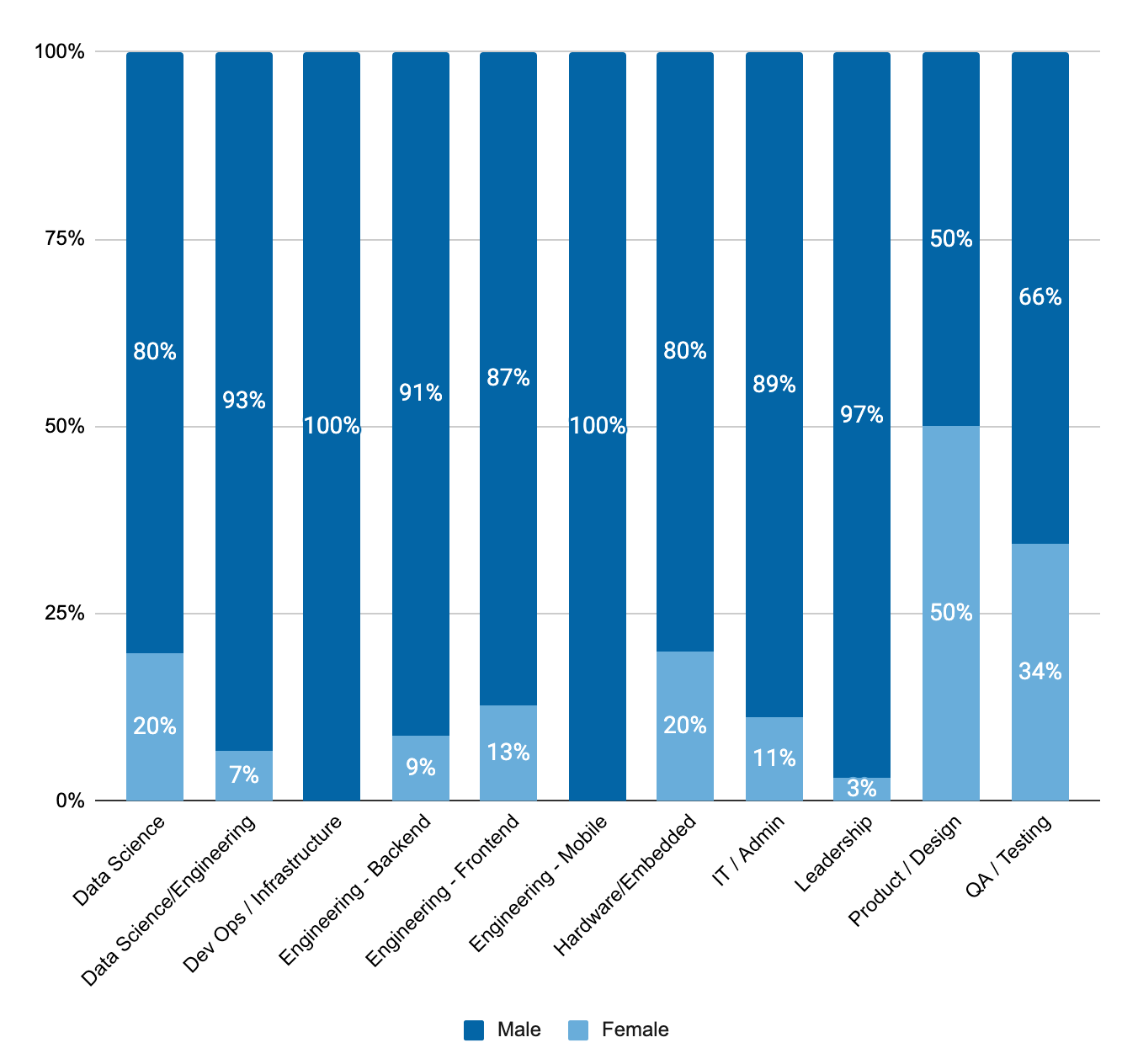 This is the first, to our knowledge, compensation report for Greek Startups. It is a tool that can help Greek startups create a strategy around compensation to attract, retain and develop talent, both locally and globally. Additionally, it demonstrates to people considering a career in the startup world, that the Greek startup ecosystem is overall offering competitive compensation packages.

Greece is converging with the rest of the job market. Additionally, in the new context of remote work, Greek companies are able to attract talent not only locally, but also globally.

We hope the information provided will prove to be a valuable resource in helping founders and operators build revolutionary startups, as well as attract and empower a fast-growing and diverse workforce in building a successful career in startups.

If you are a startup and interested in participating in the next Greek Startups Tech Compensation Report, please feel free to send your contact details to sanne@marathon.vc.