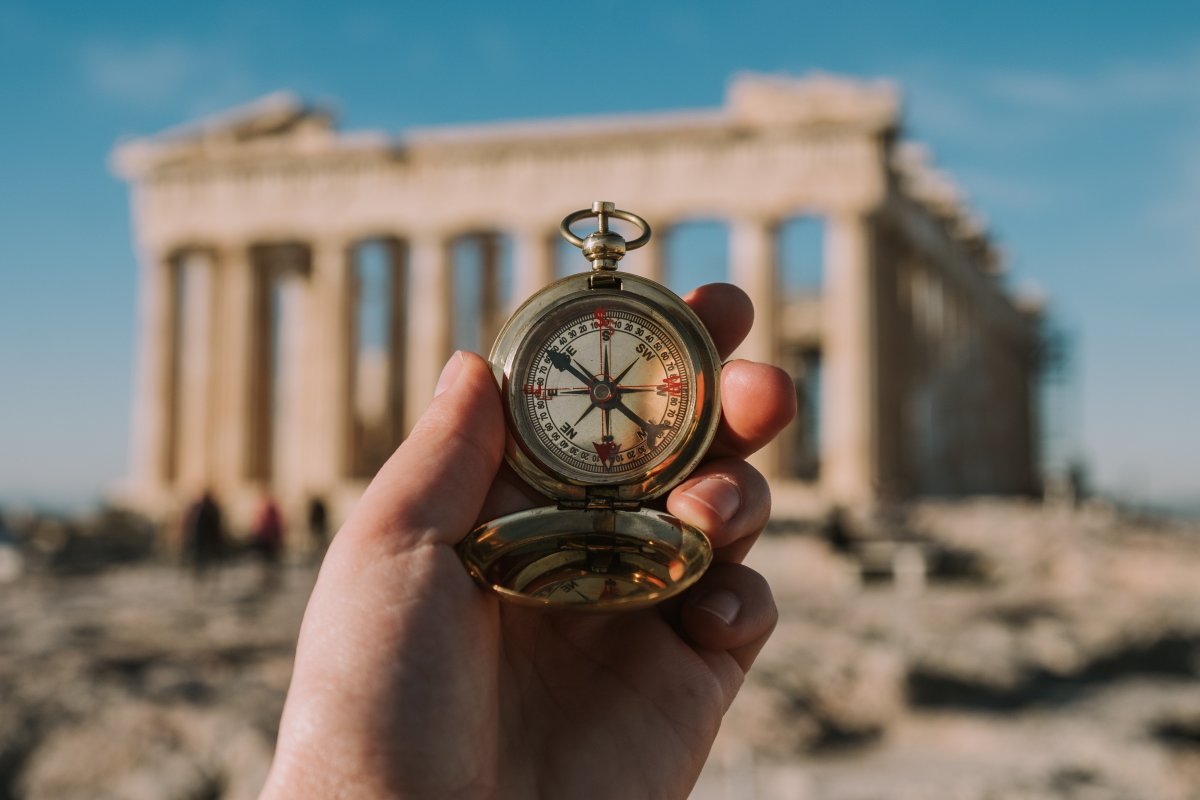 “First and foremost we are network builders. Others have been doing the same with Stanford graduates, Paypal employees or Israeli founders. We bring together Greeks, working in technology, no matter where they are, and we are thrilled about the ubiquity and underlying value of this network.”

This is how we introduced Marathon Venture Capital a short couple of years ago. Today, we are happy to report that this network of Greek entrepreneurs and technologists is quickly maturing, delivering results and giving shape to an emerging Greek startup industry.

This is the first of a series of publications documenting the industry’s evolution, focusing on investment figures and related statistics. We have built on our previous release, now including full data for the last couple of years, also extending coverage to companies established by Greek founders based in geographies other than Greece.

We have made an effort to track every single technology startup with a Greek founder –our definition of a Greek startup– that raised an investment round since 2010. Our data sources include publicly available ones such as Crunchbase, together with proprietary Marathon data. While there most probably exist more cases we did not manage to capture, we believe this is the most extensive research on the topic that has been published to date.

“Our research identified 301 Greek startups that raised a total of $2.4 billion in 500 investment rounds by 268 venture capital funds between 2010 and 2018. Moreover, a total of 47 acquisitions and 5 IPOs took place during the period. These figures highlight a vibrant industry that has already reached a considerable size.” 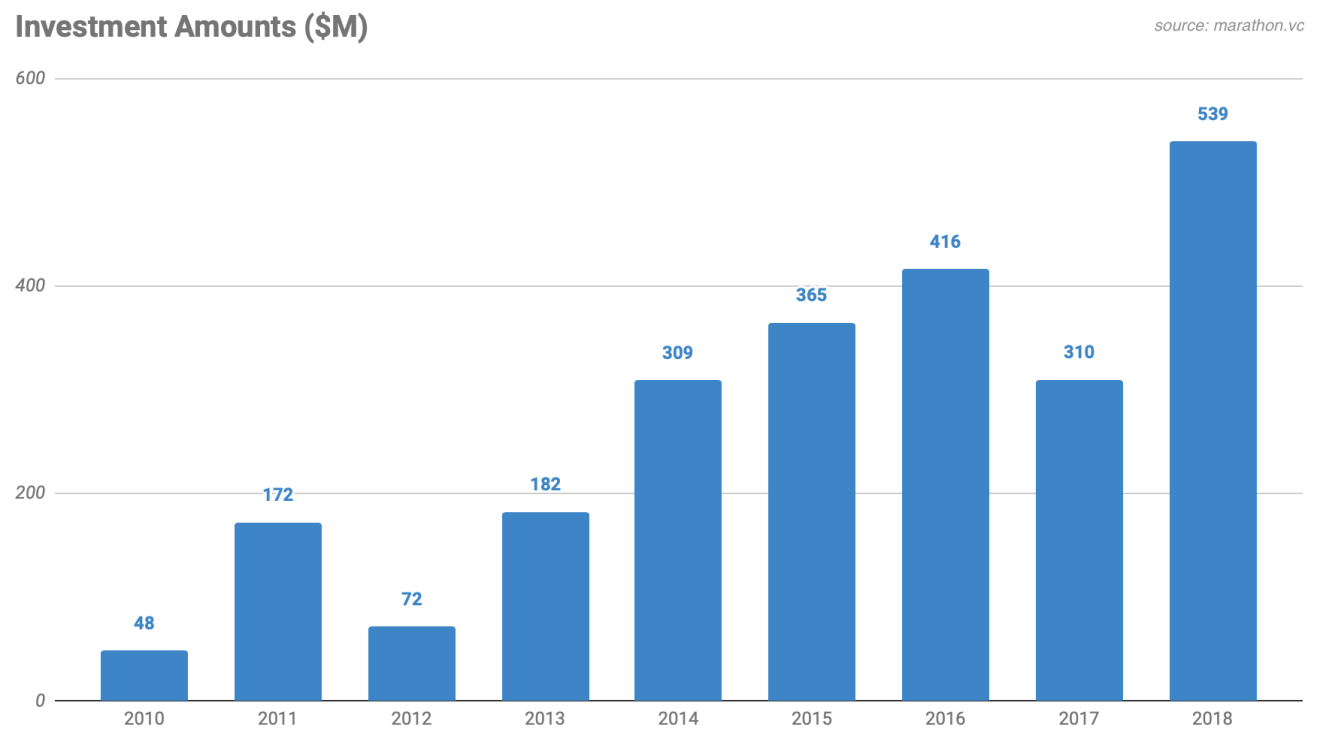 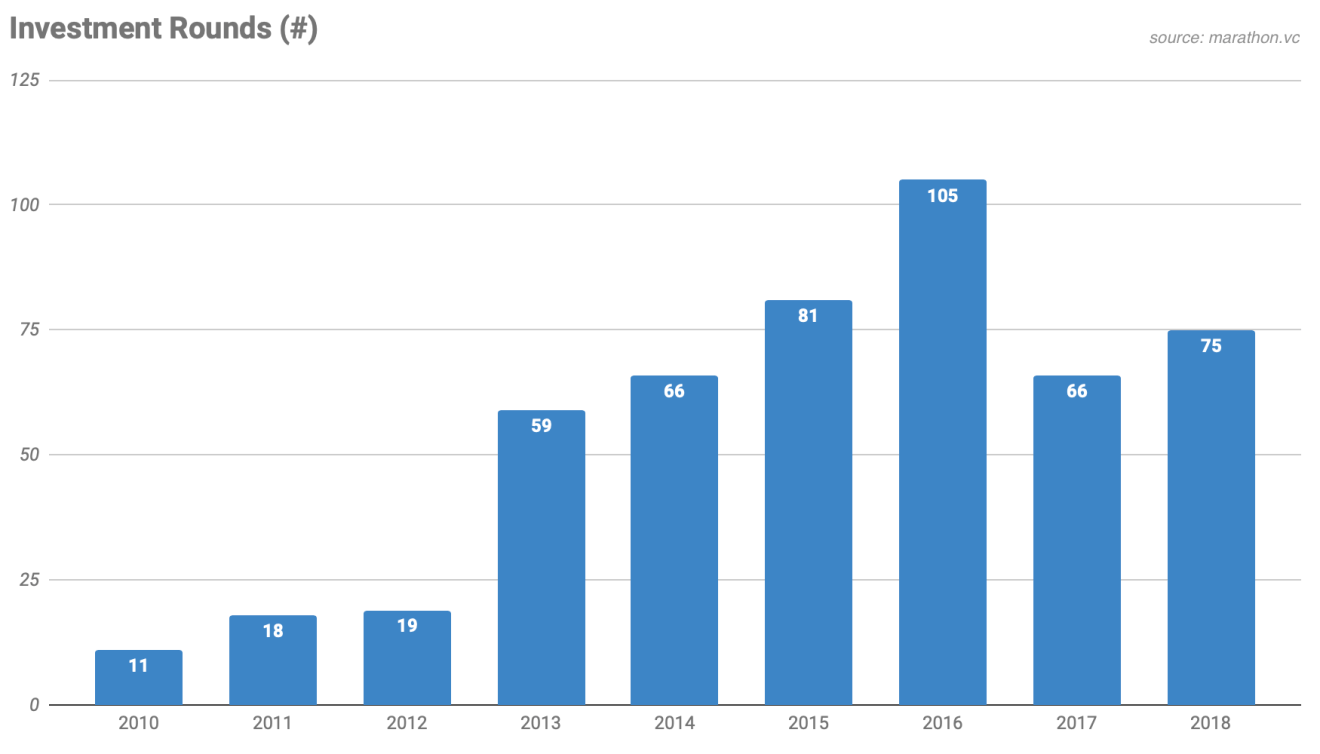 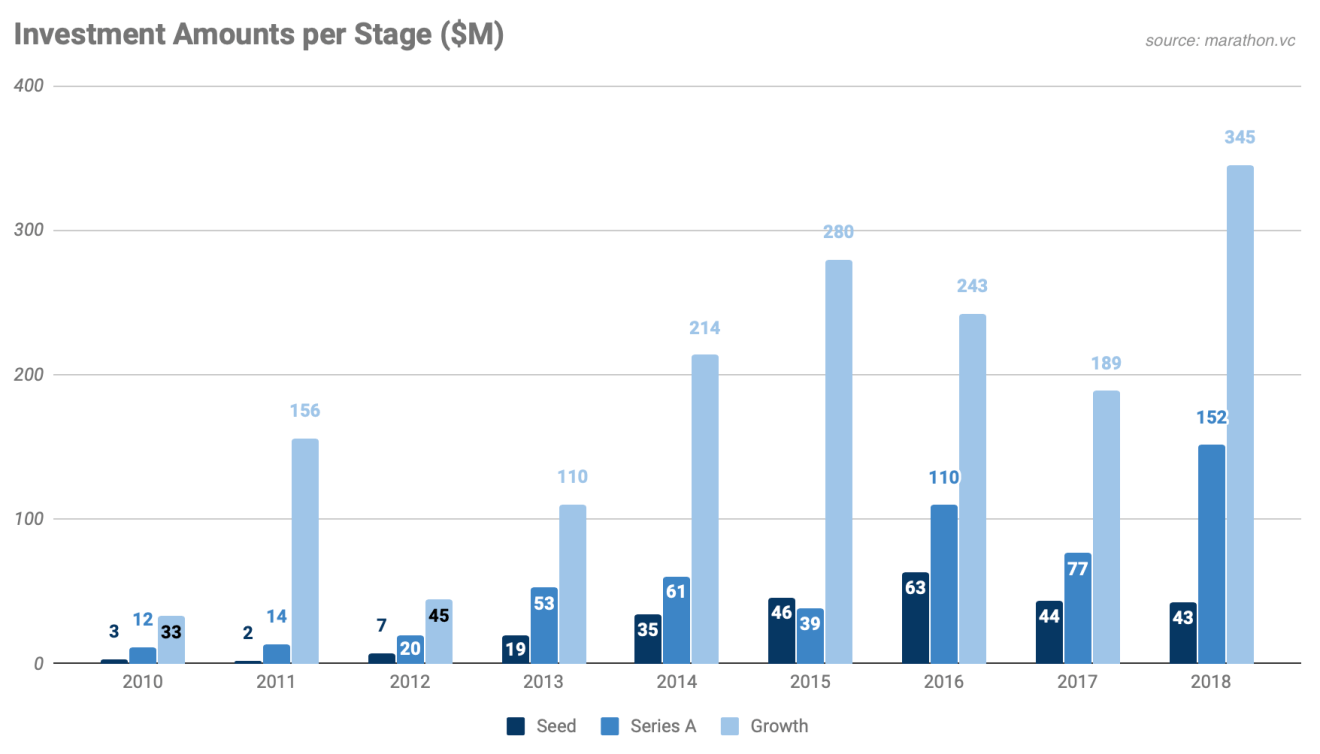 The figure above splits total invested amounts into investment stages, i.e. Seed, Series A and Growth (Series B, C, etc.). Growth rounds capture the greatest part, while all stages demonstrate significant growth, with Seed reaching on aggregate $43m, Series A $152m and Growth $345m in 2018. 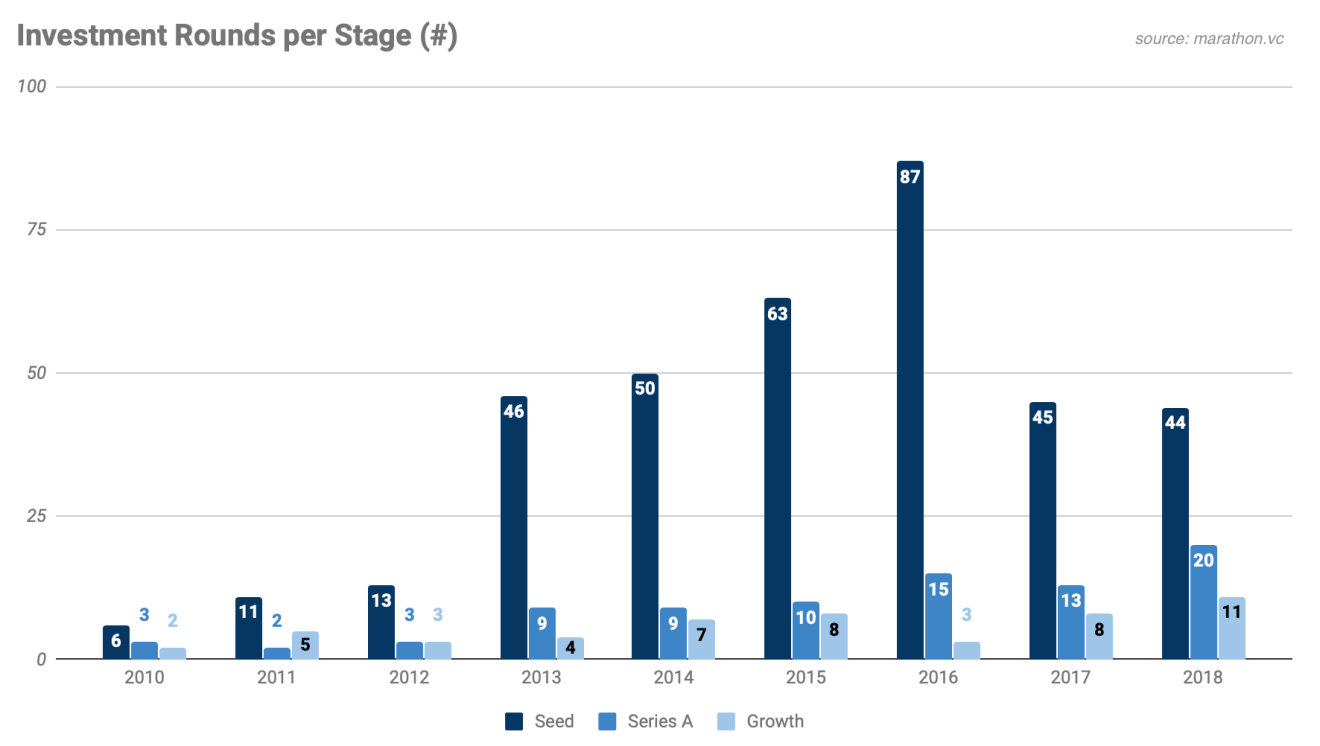 73% of the investments made were Seed ones, followed by 17% were Series A and 10% being Growth rounds. This is in line with success rates per stage, also the small number of Growth rounds explains part of the total amount variation in recent years.

To provide some context, four seed funds were introduced in the Greek market by the Jeremie fund of funds in 2013, and their impact on the number of Seed rounds spanned through 2016. In 2017 and the first part of 2018 the local market was quite dry, however, the number of investments remained significant. A new fund of funds, Equifund, four times the size of previous one, stimulated the creation of eight new funds during 2018, which are expected to further fuel the market’s growth in the next years. 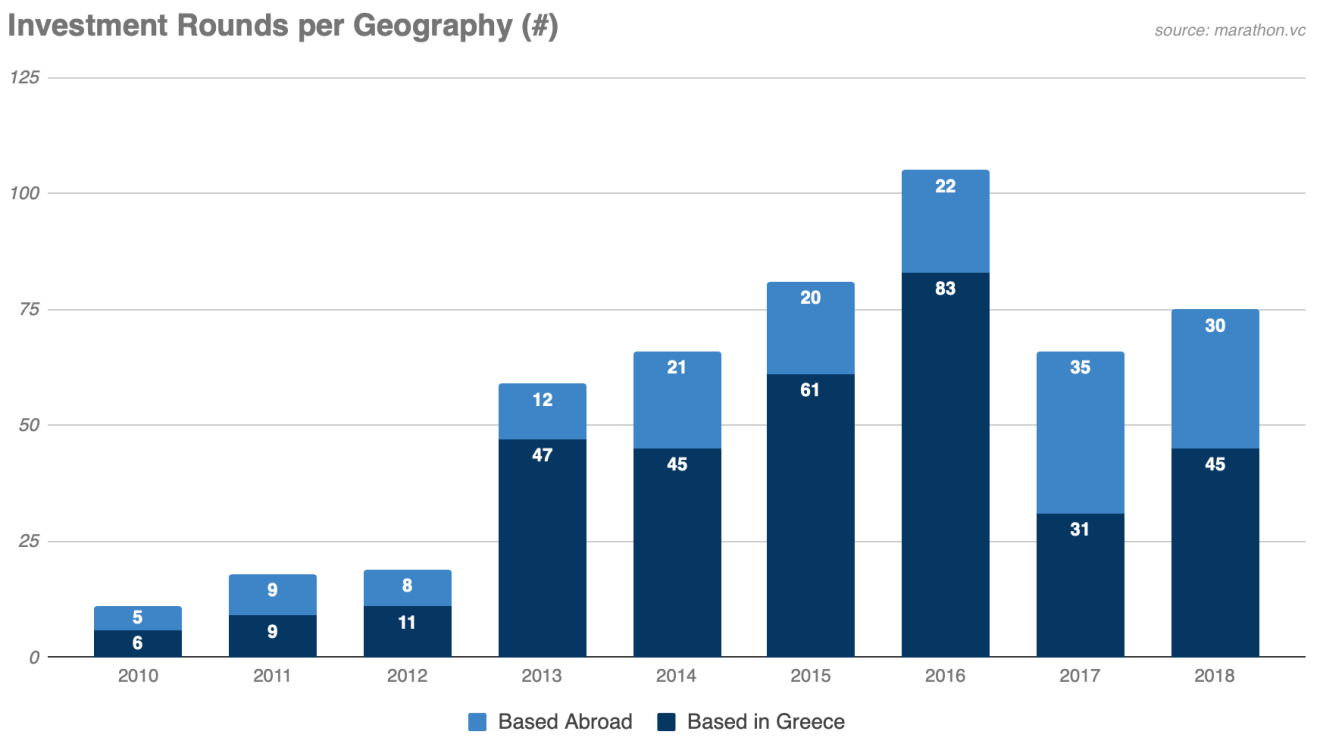 338 out of the 500 rounds (68% of total) were invested in startups maintaining a presence in Greece. Such percentage was decreased in the last couple of years, yet we consider this change largely temporary. 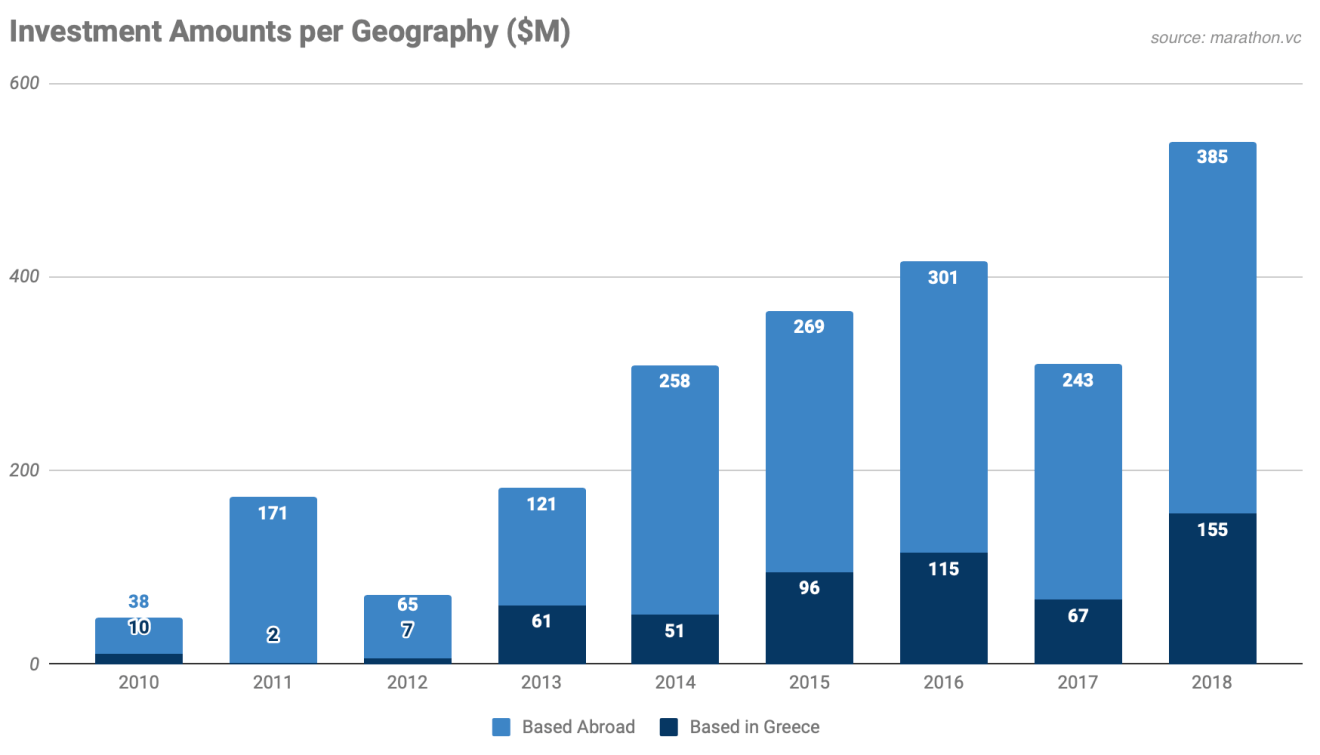 With regards to total amounts invested, the mix is reversed, with companies based in other geographies having raised 73% of the total. Still, startups maintaining a base in Greece have raised a total of $561m within the period, getting from $10m raised in 2010 to $155m in 2018, a 16x increase. 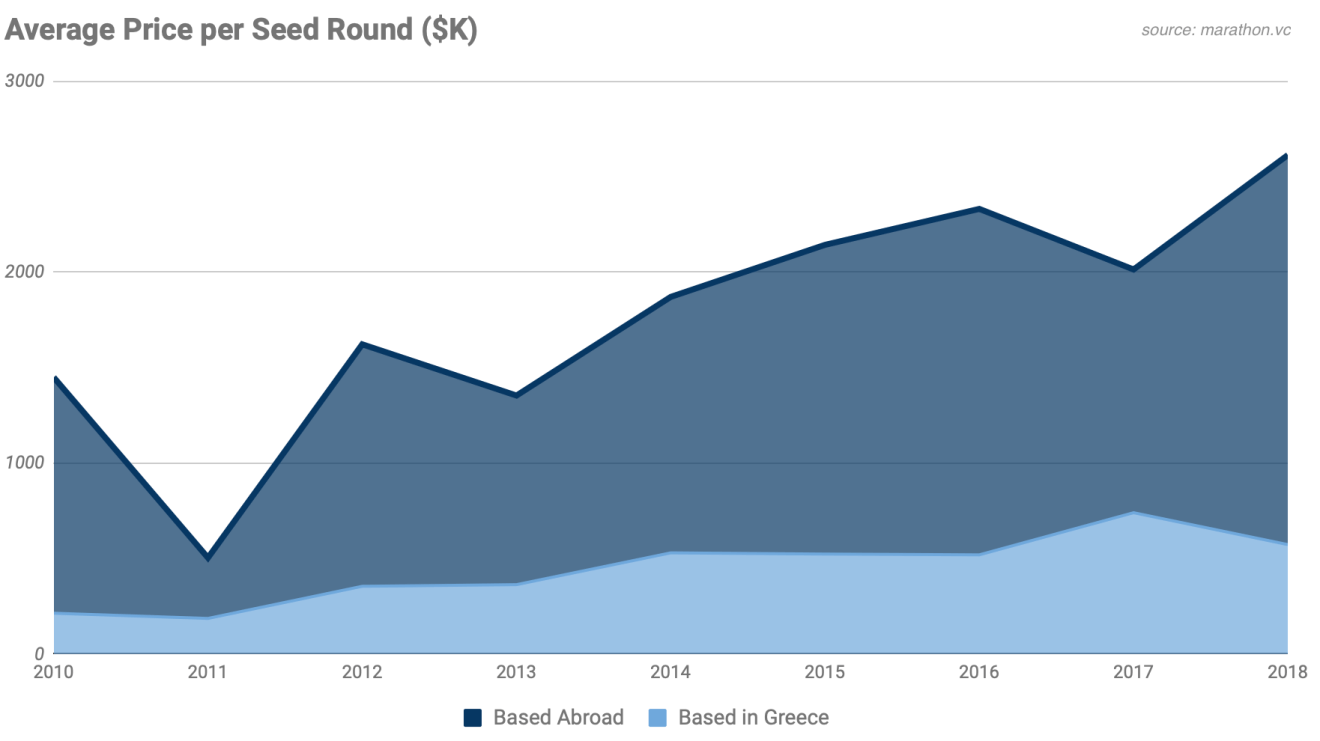 The average Seed round size for companies maintaining a presence in Greece has increased from a minimum of $171k in 2011 to $740k in 2017, a 4x increase. Still, it has been trailing compared to similar rounds in companies based elsewhere, which are typically 3x in size. The price difference (blue area) highlights the investment opportunity in the market. The effect is in force at a smaller scale also in later-stage rounds. 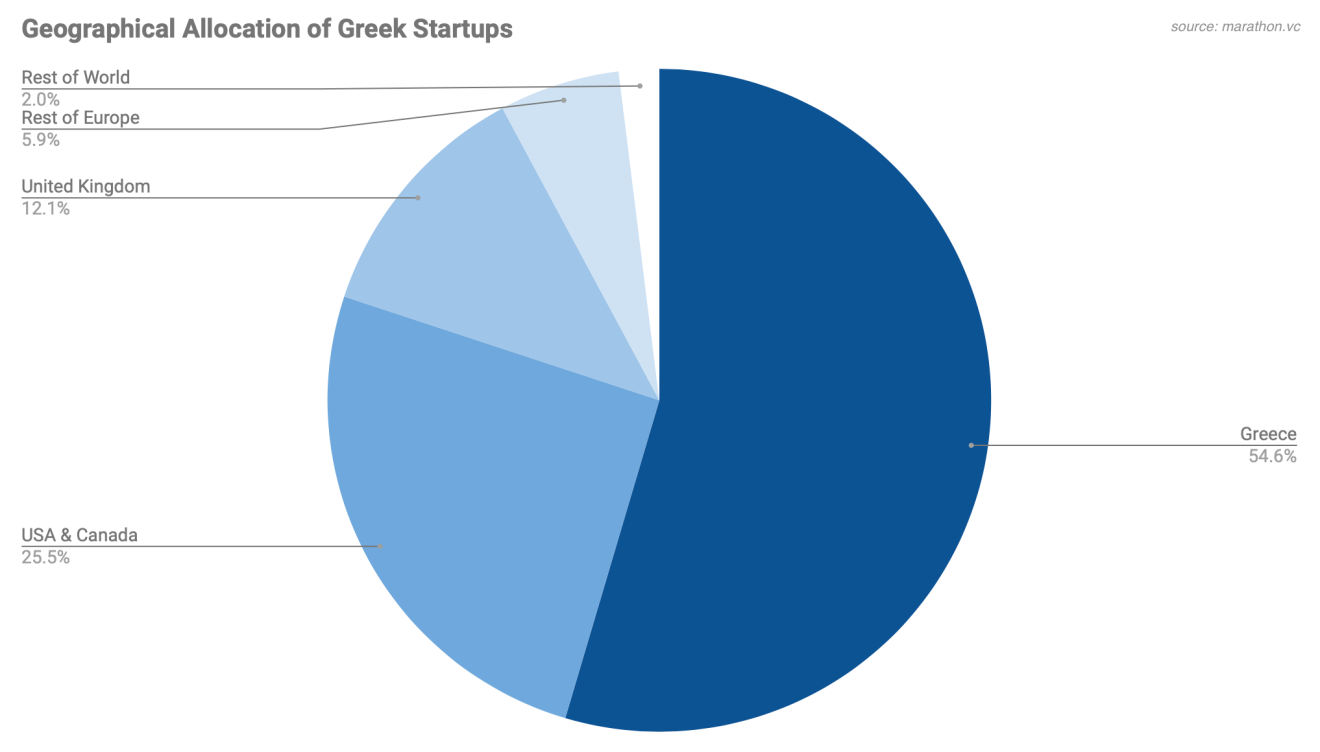 It is of interest to mention that, every single startup that started or later established a presence in Greece, still maintains an employee base in the country, while the vast majority of the founders who don’t are keen to explore such an opportunity in the future. We consider the above to be a testament to the appeal of the startup industry in Greece and expect such trends to extend further going forward.

A total number of 268 institutional investors entrusted Greek startups since 2010; 12 of them were based in Greece, and 256 were based elsewhere, predominantly in the US, UK, Europe, and Israel, while the figure does not include angels and corporate investors. 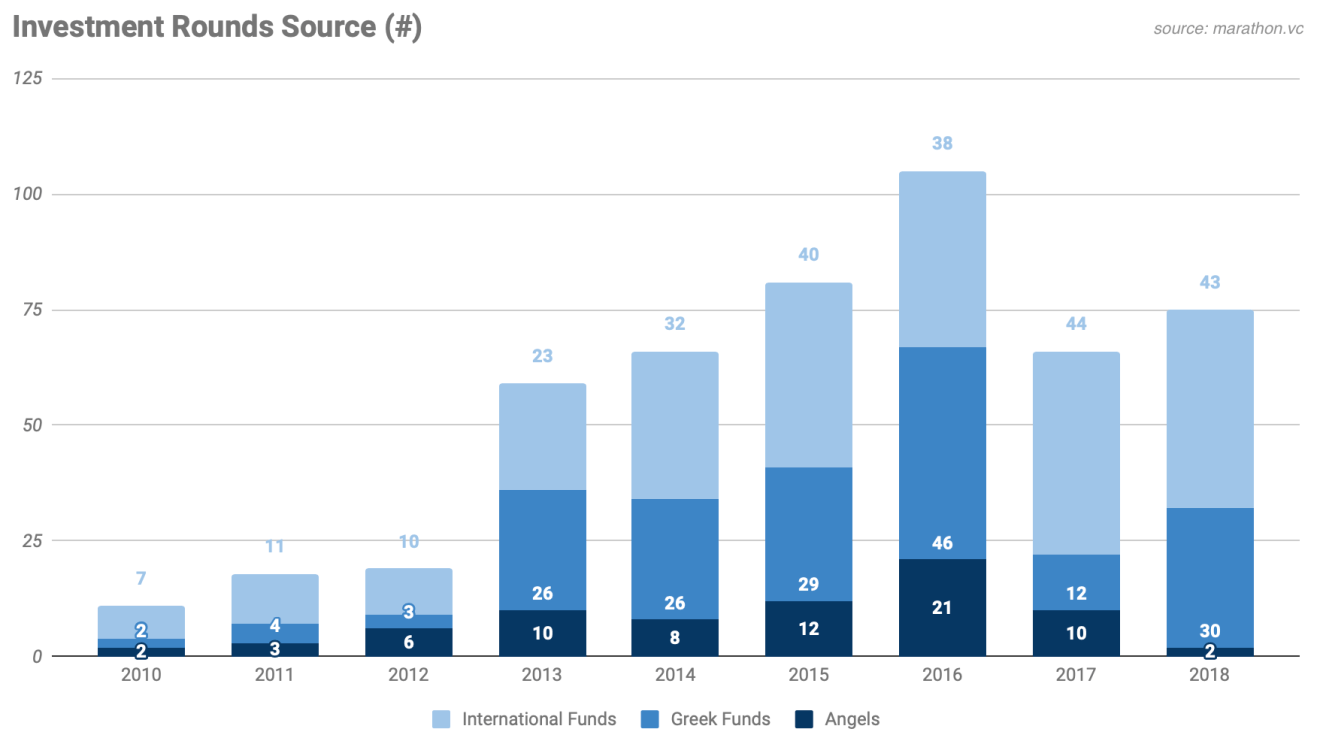 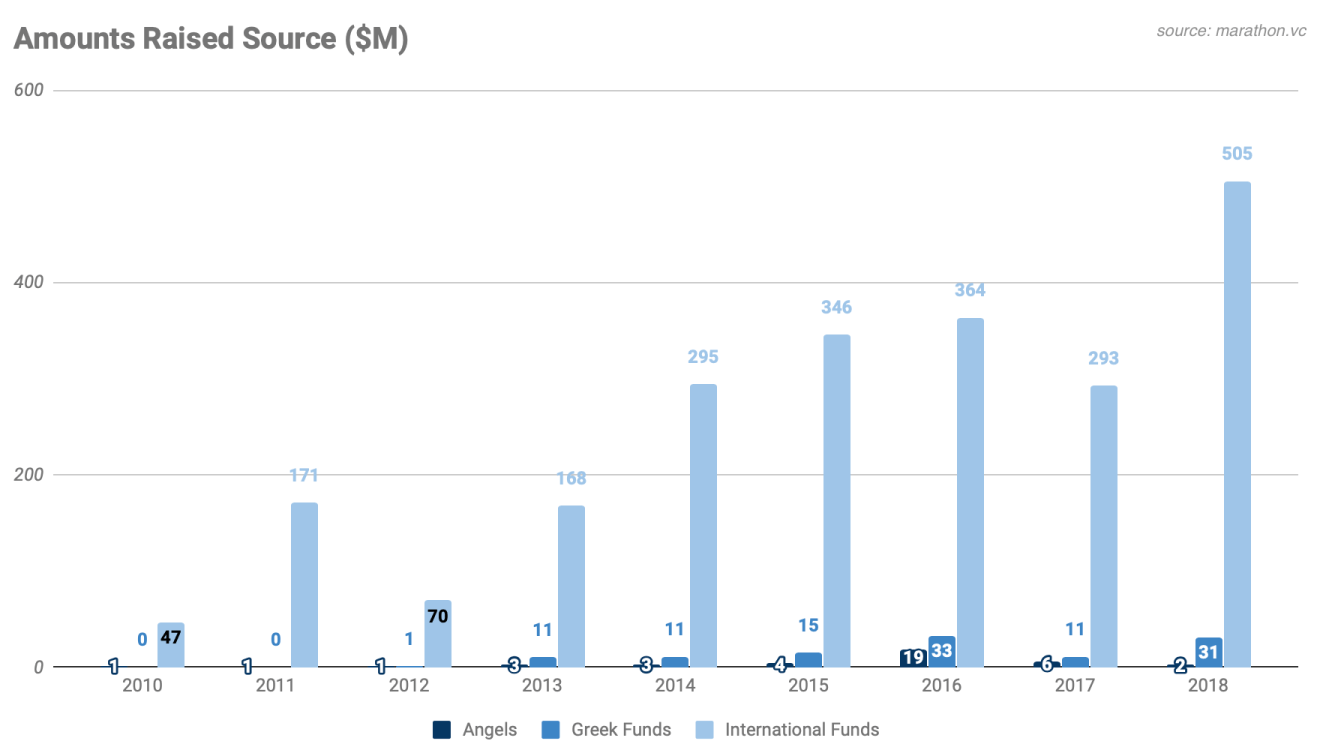 The vast majority of the amounts invested originates from international investors, who are typically leading Growth and Series A rounds. Greek startups are attracting significant volumes of capital. 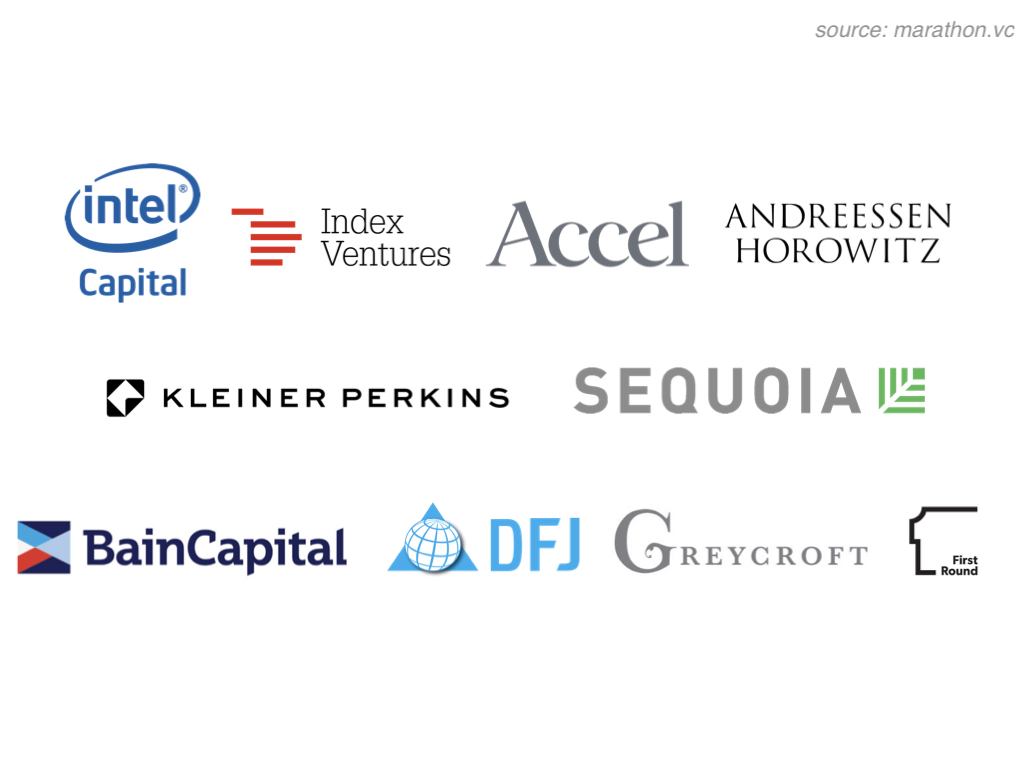 The above figure highlights international funds that have invested in three or more Greek startups.

The list is impressive – some of the most prominent VCs in the world are invested in our industry. 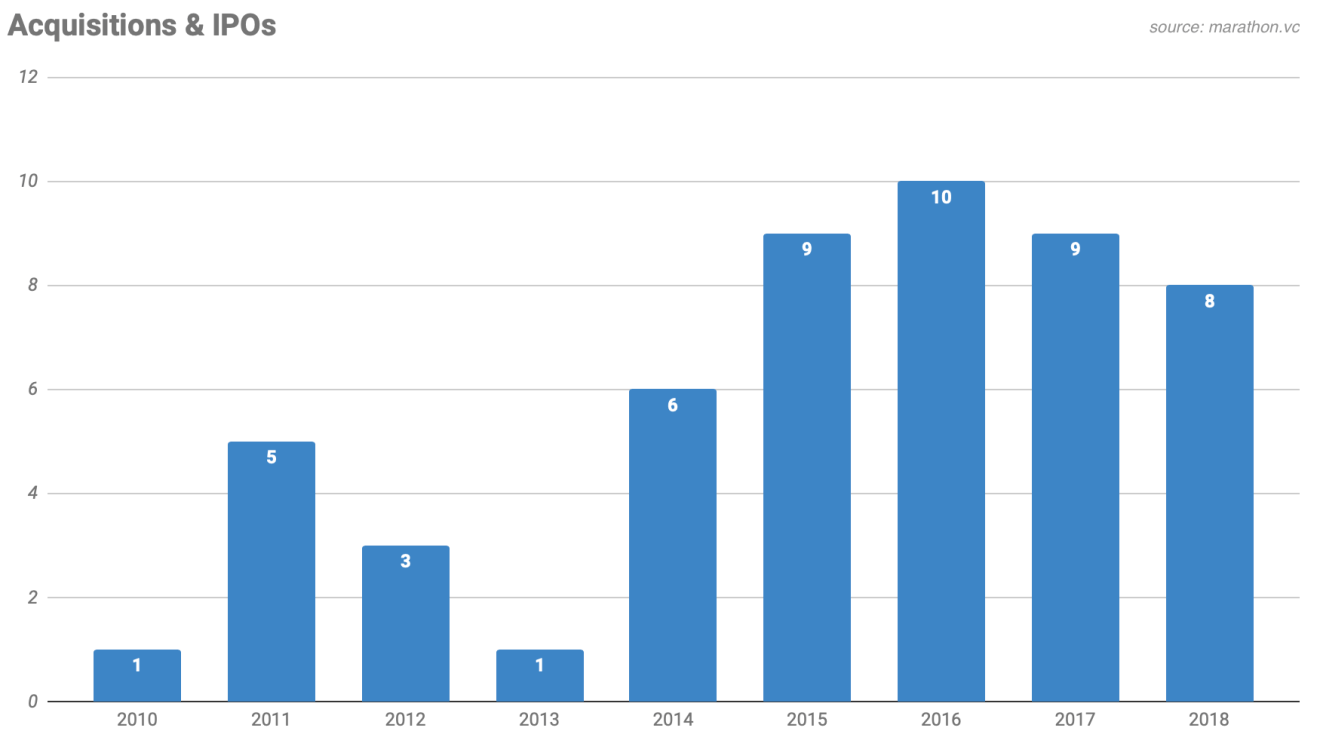 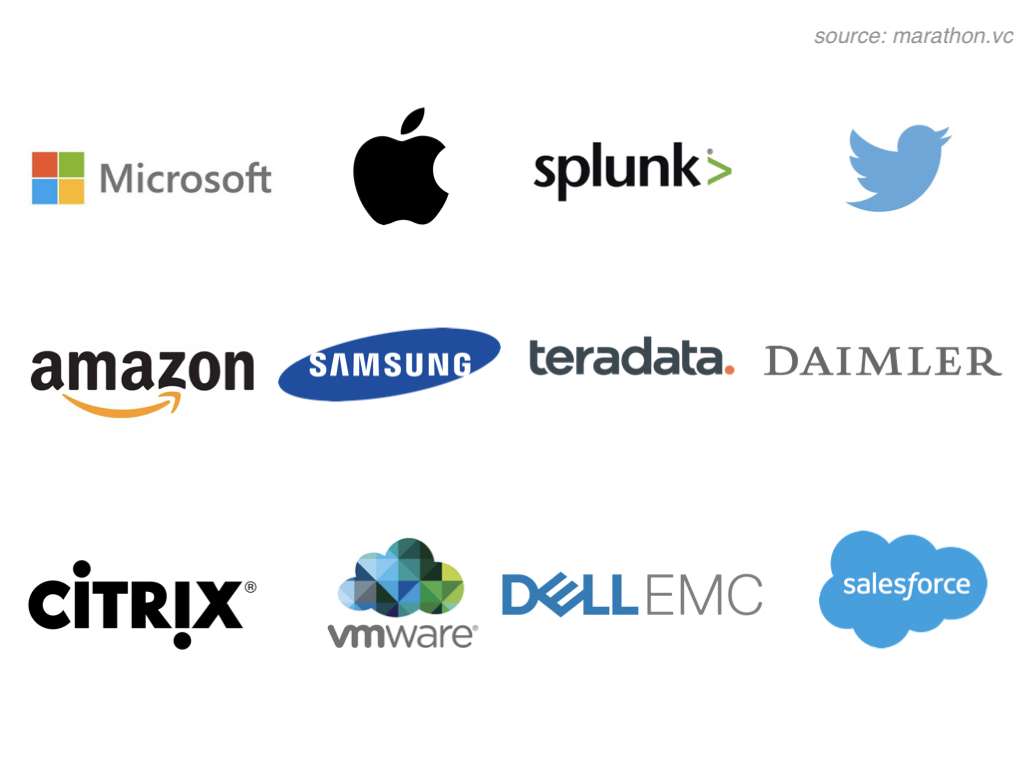 The above figure highlights some of the company buyers that are already active in our industry.

Greek startups are getting acquired by some of the largest technology companies in the world.

To conclude, many of the above figures may surprise even those following developments in Greek startups closely. There is plenty of investment activity taking place already, as well as plenty of room to grow. We hope such facts to further stimulate confidence and trust, hence more people, companies and capital joining the Greek startup industry.

In the words of a founding figure of the Israeli ecosystem, who felt a bit nostalgic when we were sharing our story and current status, “You do the first two, three successes, then they become ten or twenty, then the rest is history”…